Recently we had even more of our rush matting replaced, this time in the State Withdrawing Room.

This room houses some of our finest pieces of carved wooden furniture, including the beautiful Sea Dog Table that visitors can walk all the way round. This does however cause extra wear on our floors, and the tape patches here have been getting more and more extensive.

Before we could remove the old matting we had to move most of the furniture in the room, including said Sea Dog Table, which breaks down into 17 separate pieces. We moved the pieces into the Green Velvet Bedroom and lay them out on the floor there. Visitors were really interested in seeing it deconstructed so we have now put a photo out in the room. 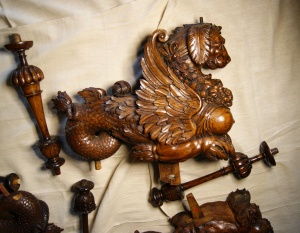 One of the Sea Dogs

The same company who did the High Great Chamber for us came back for a (long) day with three rolls of brand new matting to install! Here is a link to the company we use: http://www.rushmatters.co.uk 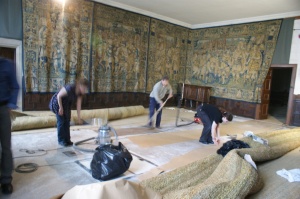 We removed the old matting in two pieces and had three rolls of brand new dancing to replace them. As well as the new matting in the center we decided to turn the piece of matting to the side of this, so that the least worn edge could be sewn to the new matting strips. This meant moving an awful lot of furniture but will hopefully be worth it in the long run.

Turning the rush matting is something we can do to try to help a piece last as long as possible, moving worn pieces from the areas that get the most wear. Now our beautiful Sea Dog Table is framed by nice new matting that will hopefully last for many more feet to come!

Last bit of blabbering about my European adventure! For the main part of our holiday were staying in Langenau, an odd little town on the edge of Bavaria. One day we went for a stroll around and it just seems … END_OF_DOCUMENT_TOKEN_TO_BE_REPLACED

Once upon a time Hardwick Estate was used as a base to train Paratroopers during the Second World War. I heard a tale that it was thanks to a conversation between Winston Churchill and the Duke of Devonshire where Churchill mentions his ambition to create a unit of paratroopers. The duke promptly offered up Hardwick and so in 1941 the Estate became home to the 1st Parachute Brigade. How true that story is I’m not sure, but it’s a funny little tale so I thought I would share anyway.

Every year to commemorate the service of the troops that lived and trained here there is a ‘Para-Parade’ through the Estate. Men who actually trained here and new members of the same same regiment marched from the North Orchard through to the Stable Yard. This year was an extra special celebration due to it being the 70th anniversary of the Normandy Landings.

However, before the parade can begin they have to wait for the signal, a fly-over from a Douglas C-47 Dakota Military Transport Aircraft! I was very excited about this and got to go up on the roof to see it and take some photos. The Dakota planes were used from from 1941 to transport troops and supplies, and for brave paratroopers to jump from. It wasn’t quite as noisy as I had expected but really thrilling to see it flying right above our heads.

As well as the Paras old and new we had re-enactors in the Stable Yard, and they brought along lots of interesting toys. I had to go out and have a bit of a nosy and of course take a few piccies. If I was ever tempted away from Medieval re-enactment I would love to try WWII so I really enjoyed chatting with the re-enactors and finding out about what the men experienced while they did their training on the estate, and after they jumped!

All the kit displayed below was carried by one paratrooper, who was expected to be able to complete a 7 mile hike whilst carrying all this in less than 1 hour 30 mins! Working at Hardwick I am the fittest I have ever been but I’m not sure I could manage 30 steps with all that strapped to me! I was quite amused to see that among the essentials there was a shaving kit included, as well as Oxo cubes and chocolate! (something I’ve always personally considered an essential) 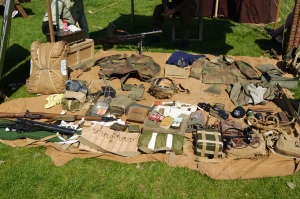 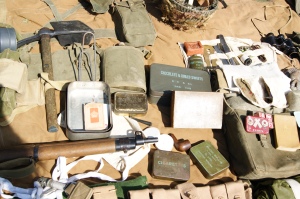 It was a really exciting weekend, helped by the beautiful weather and I was so glad to be there to join in all the fun!

Whilst on my recent holiday to Germany with my family I got to visit the most beautiful fairy tale castle I have ever seen, straight out of a children’s book; Neuschwanstein Castle. The castle was built by King Ludwig II of Bavaria, who had a very sad life, and was never finished due to his suspicious death at only 41. He dedicated the castle to Wagner, the composer, and each of the rooms was themed around one of the stories from his operas.

The first glimpse of Neuschwanstein Castle 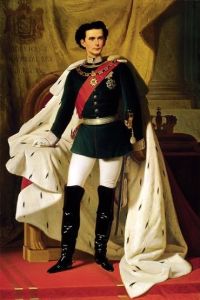 Ludwig became King when he was only 18 after his father, King Maximilian II, passed away. He had not been very close to his father but tried to be a good king and despite his eccentricity and real dislike of  public gatherings he was popular with the people. Unfortunately the ministers wanted a puppet King that they could control and Ludwig’s independent mind stood in the way of their plans.

To retreat from the pressures of office Ludwig began building fairy tale retreats, he built several castles before starting Neuschwanstein Castle in 1869. He never completed it. In 1886 the ministers declared Ludwig insane in a bid to gain control once and for all. He was taken from Neuschwanstein to Berg Palace. The next day King Ludwig and the psychiatrist that had declared him insane were found drowned in Lake Starnberg and his younger brother Otto, who was considered insane, succeeded him. 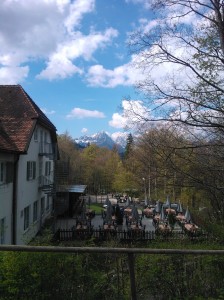 The view on the walk up

To get to the castle you have to make your way up the mountain to it. You can walk (about 15-20 minutes), get a coach or go by horse and cart. We walked up, a really beautiful walk, and down again, taking a detour to a bridge where you can get a really good shot of the castle perched on the mountain side.

Me on the bridge

Every room that had been finished on the top floor was decorated so highly, stunning embroidery and acres of gilding and brightly coloured walls. It took a team of carpenters 4 months to carve the wooden furniture in his bedroom but the end result was more that worth it. Every corner you turned just took your breath away. Completely over the top but completely amazing. A tremendous amount of imagination and work for what would have been the most stunning fairy tale home! 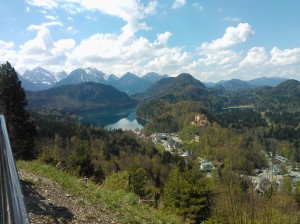 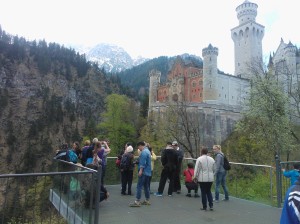 Due to how much the building of the castle cost the government decided to open it to tourists only month’s after the King’s death, and you could see where many of the objects had been handled, and chairs sat on before conservation measures were put in place. Now the castle is only open by time guided tour, and each of the rooms has perspex walls inside the main walls, to protect the furnishings and decorations from sustaining any more damage.

The oddest part of the day was visiting the gift shop. There are several souvenir shops on the walk up to the castle from the car park and more gift shops after you leave the guided tour, and they sell the usual sort of thing, including postcards, t-shirts, key rings, mugs ect with people relevant to the castle’s history on them. So there were souvenirs featuring King Ludwig, Charles Wagner and one particular woman in a very beautiful ball gown. However could we find any information on this woman during our visit? No. Her name was given on the merchandise she was featured on but that was all we could find. She was not mentioned on the tour, nor in either of the books we purchased in the shop.

After a bit of googling I found out that her name is Elisabeth, Empress of Austria, also know as Sisi. She was King Ludwig’s cousin and close friend, but it it is not clear if she ever visited it, I can’t find any information one way or the other. I can’t find a reason why she is so heavily featured in the gift shop but not mentioned during the tour. Maybe it’s just a case of every good castle needing its own pretty princess. But maybe there is more to it that than, I know if I was friends with someone who owned such a magnificent castle I would try and make sure I got to visit!

Inside the Castle Courtyard

This is the castle that Walt Disney took as inspiration for Sleeping Beauty’s castle, which can be found in every Disney Land/World. And you can see why he did, it is the most stunning looking castle in such a mind-blowingly beautiful location! And the interiors match the exterior for beauty. You weren’t allowed to take photos inside, but you can find images on google if you want to have a look.

Neuschwanstein Castle has to be the most beautiful castle I have ever visited, I would love to get to spend some more time there, just staring at the amazing decor and discovering the stories painted on the walls. As I was on the tour I couldn’t help but think how much I would enjoy working there and getting to clean that collection(weird I know), with all the intricately carved furniture and stunning embroidery. It’s honestly the sort of place that could tempt me out of the country. So that completes post number two about my European Adventures! Stay tuned for more 😛

Sorry for the lack of recent posting, I went away on holiday a couple of weeks ago to Germany and feel like I have been playing catch up ever since. As I have some free time now I thought I … END_OF_DOCUMENT_TOKEN_TO_BE_REPLACED

Just wanted to share with you this amazing video re-colouring one of our Gideon tapestries. It gives us a glimpse into the past, showing what the tapestry would have looked like when Bess hung it on the Long Gallery walls all those many years ago, fascinating!

Have you ever wondered what our tapestries would have looked like with their original unfaded colours?

Take a look at this brilliant digital representation of one of the 16th century Gideon tapestries from Hardwick Hall. See it fade from it’s original colours through to what we see now – 450 years later.

There are 13 of these tapestries, 10 have been conserved with the 11th currently in the studio and fundraising for the remaining two ongoing to preserve them for the next 100 years.

Thanks to our colleagues at Hardwick Hall and Rusty Monkey Ltd for this video and to Chris Tims who took the original photos.