After one of our re-enactment shows last month me and the mother decided to stay over an extra night and break up our journey back home with another National Trust property, as we love to do. I really wanted to visit Snowshill Manor and gardens, this was the property we had decided not to visit in favor of Dyrham to try to get on the roof so I was really pleased to go and see it now, and it was fab! 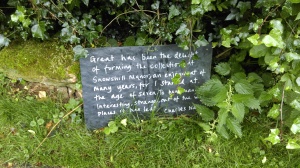 The house is opened by timed tickets which is good in the narrow walkways. We did have to wait a little bit to peek into one of the rooms downstairs, but when we got upstairs it didn’t feel too crowded for the most part.

There has been something on the site of Snowshill Manor since at least 821 AD and the earliest parts of the current structure are medieval, it was even given to Catherine Parr by Henry VIII as part of her dowry. However when the building was purchased by Charles Wade in 1919 its new purpose was set; to house Charles’ treasures from around the globe. 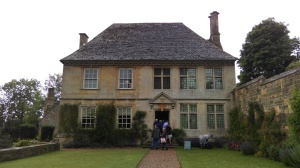 Charles Wade started collecting items that interested him when he was a child and after restoring the manor it provided a place for him to display and enjoy his collection. Each room has a general theme and they all have different names, many mythical creatures. Charles himself, and much later his wife Mary, lived in a small cottage just next to the main house, which is also full to the rafters of interesting objects.

The house itself looks quite small from the side visitors enter, but going down into the gardens you can see that it spreads back quite a way. It is a maze of small rooms with so many things in every room! The motto that accompanies Charles Wade’s Coat of Arms is Nequid Pereat which translates as ‘Let nothing perish’ very fitting not only for Mr Wade but also for the National Trust as a whole.

There were many, many curious objects throughout the house, but one of the first that caught my attention was this rather strange bust. Looking it up on the National Trust Collections website I have found out it is a 16th Century Spanish Reliquary. I don’t know what was displayed in the hole in his chest but the gristly part of me thinks it should have been a heart! (Unlikely but wouldn’t that have been a sight!)

I loved these little bone figures which were displayed either side of a doorway. They were carved out of bone from prisoner’s rations during the Napoleonic Wars, and a re so incredibly detailed for such small scale pieces.

My favorite room is the Green Room full of Japanese Samurai armour. The armour has been set out to look as if they are soldiers camped out, ready for battle or adventure. Some sit around a camp fire while others stand, keeping guard. Most have masks but a few have wooden faces and you feel like at any moment one could turn its head towards you and bark at you for intruding into their camp.

Add to that the low light levels and whistling wind sound effects this room is a very atmospheric one. I couldn’t get a very good picture of the room so the one above is from National Trust Images. Even though it was quite eerie I really liked that room. 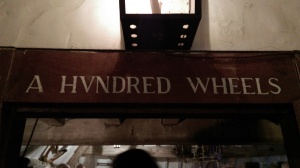 On the very top floor is a room called ‘A Hundred Wheels’ for very obvious reasons. The room is so full of bikes and trikes and carts and carriages they are hanging from the rafters! Some are real vehicles, some toys or models and other mini versions made for children.

There are so many objects in this wonderful collection that even just flicking through the guidebook I have seen thing I didn’t spot on my visit. I will have to go back and spend a long time looking round. By the end of my visit however I was starting to get a bit of object fatigue! 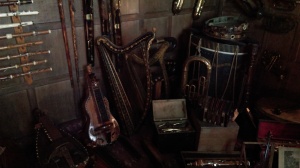 There was not a lot of interpretation in each room, which suited me fine. I like to just be in the rooms and only tend to want information about specific things. For such instances Showshill has very knowledgeable room guides and folders in the rooms with further information about the objects. I then go away and read the guide book, and look up anything I want to know more about online.

Here are a few pictures of some of the objects that did catch my eye during our visit. So many pretty and fascinating things!

I have been inspired by the next picture, all these different keys were presented in a frame. I love old keys and have always kind of wanted to collect them but not for the to just sit around in a draw. So now I am going to gladly start collection them and do something similar for myself!

I love the idea of collecting items that interest you from all your travels, the mundane and the far flung. Wouldn’t it be fab to have your own collection like this to display your passion, and your life’s story! What a legacy to leave behind, although I think mine would definitely involve a bit more glitter! On the side of the little cottage where Charles actually lived there is a lovely little clock mechanism where every time it strikes St George here strikes the bell. I don’t now if he still work but I think it’s a really cute feature. 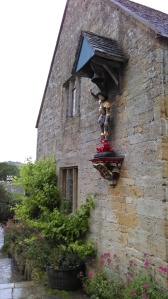 I hope I’ll get a chance to go back, maybe next time I’m in the area, and spend even longer looking around. I also need to visit Berrington Hall as well, as they now have Charles Wade’s collection of textiles and costume! I think they’re only on display occasionally so that may even have to be a special trip! Snowshill is a must visit for anyone with an interest in amazing objects and fascinating collections, and as of September they are open seven days a week. ‘Yay’ for visitors but send a prayer to their conservation team, dusting all that with no closed days! Oh, and the restaurant does a lush crumble and custard!

After our trip to Woolsthorpe Hall me and my friends spent the rest of the afternoon at Belton Hall. I have been meaning to visit Belton for a while, as they have just been through a National Trust project that we … END_OF_DOCUMENT_TOKEN_TO_BE_REPLACED