I love Halloween, any excuse to dress up and eat sweets is a very good idea in my opinion! This year at Hardwick we the House Team wanted to work closely with the Community Engagement Team and make a really great offer across the whole estate for families over half term.

So a lot of trawling Pinterest later we had decorated two rooms in the Hall, and if you ask me they looked spook-tacular (he he)! We dressed to Duke’s Room and the Still Room, but unfortunately we had a bit of a disaster in the Duke’s Room when it flooded (more on that in another post). However before that point we had a lot of fun putting the rooms together and getting creative. 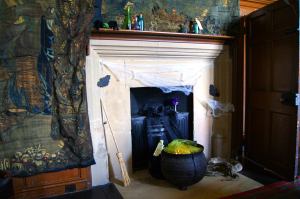 There were carved pumpkins in the Stableyard and spiders leading visitors through the gardens and house, potions brewing in the garden and Halloween crafts happening all week, which were a huge hit with the families. We were so busy, we had crowds of children making Halloween ghost puppets and spooky mobiles.

One of my colleagues did a fantastic job creating this picture of Mary Queen of Scotts, photo-shopped from the painting that hangs in our Long Gallery, the perfect spot for a spooky selfie!

I helped out with the crafts for a couple of days, which I really enjoyed and it took me back to my days of being a Cub Scout leader. When I was a Brownie evening where we were doing crafts like these were my favorite so it was really nice to help out with the kids activities and seeing them enjoying themselves, and my colleagues’ creativity and hard work paying off. It was also a good excuse to dust off my Halloween head-wear and wear horns and cat ears to work. 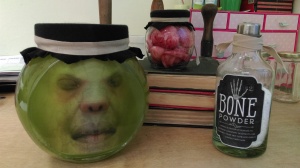 I spent the week before Halloween making decorations, haunted books and putting heads in jars. A few simple ideas from Pinterest but they all looked really effective! The slime was brilliant but I think the head in the jar was my favorite, and people’s reactions to it were perfect.

I spent Halloween night at Leeds Armouries, at their event ‘Night of the Living Dead’ which was so creative, and quite scary too! I decided to dress up as zombie butt-kicker Wichita, from ‘Zombieland’, basically an excuse to wear my new black boots and leather jacket, and was accompanied for the evening by a mad scientist, an escaped convict and a Kerry. 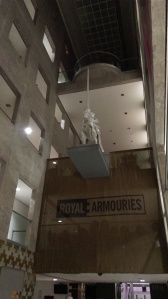 The event started in the evening, which meant we got to be in Leeds Royal Armouries after hours! The armouries is in a really nice area on the waterfront and it looked so pretty at night-time.

First off we were briefed in the War Cinema and suddenly a very fierce army lady came charging in shouting orders at us, I was scared already. Then we were taken on a walk through the War Gallery, which was unfortunately infested with the un-dead!

It stared off with one zombie here and one zombie there but soon enough they were popping out from behind every corner and jumping out behind us. I may have screamed, once or twice, but after getting out alive I kind of just wanted to go around again, it was so much fun!

After our ordeal we were treated to cocktails and special effects make up! I was really looking forward to this part and the make up artists were fab. All the zombies we had seen earlier had been very convincing and now it was my turn.

We all tried out a slightly different type of make up and then met up with my friend Sadie, who had been infected earlier and had been one of the zombies jumping out at us. I think she looks amazingly scary, I’ve never been happier to see someone covered in blood. 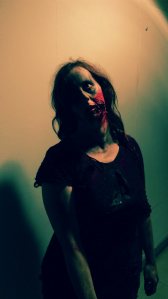 Once we were all zombie up we sat in for a screening of the original zombie movie ‘Night of the Living Dead’. I had never seen this one before and even though I don’t usually love black and white movies and it wasn’t what I expected, especially the ending, but I enjoyed it.

It was the first year Leeds Armouries had run such an event and I hope it’s not the last. I loved getting to be there in the dark and having such a different experience in a museum I have visited many times. It must have been a huge undertaking for them but I think the staff might have enjoyed it just as much as we did.

So all in all Halloween this year meant indulging in my favorite things, craft, creativity, heritage, zombie movies and spending time with my friends! Hope you all had a frightfully good Halloween, whatever you were doing!

Recently I went down to stay with my dear friend and help out at her work, as well as indulge in some much need catching up over tea and cake! Becky is the Heritage Manager at Droitwich Heritage Centre and I help them out by doing some conservation work there.

I started my career by volunteering and it is nice to still be doing some, especially knowing that what I am doing would other wise probably not get done. Money is so tight in the heritage industry and smaller places must be all they can to juggle all their needs on a small budget.

I have been down several times before to train staff and volunteers and to set up some good conservation practice. Doing something like this gives me chance to stretch my conservation muscles! This visit we did some object handling, metal polishing and decorated for Halloween! I just have to say that fake cobwebs are so much fun to play with!! I have since covered my house and the Still Room at Hardwick as well!

When I was not helping at the TIC we decided to do a little Trust visiting and go to Packwood House and, since it was so close, go to Baddesley Clinton again too. Packwood is known for its collection of tapestries, so obviously I was very interested to see their interpretation. The house was restored by Graham Baron Ash in the 1920’s & 1930’s.

The interpretation was done in a similar manner to that at Baddesley, where it was presented on objects, like printed on a rug or even a reproduction tapestry. I really like this style of interpretation. I tend not to want to read long pieces of information until after I have finished looking around a property, unless I want to find out something in particular. That’s why I always try to buy a guidebook, so I can read more about the property at a later date (and look up info’ for blog posts!). They had chosen to put quotes about Baron Ash, the house and the gardens from past visitors and guidebooks around the house.

Personally these quotes didn’t grip me or give me a sense of who Baron Ash was, as they were supposed to. I don’t know if this had something to do with the fact that I did not see a picture of Graham Baron Ash in the house (I may have missed it if there was one). Other properties where you get a strong sense of the people their faces are imprinted in your mind as a starting point for any other information to grow from. I left feeling like I wanted to know more about the man who I though you could admire for his take on conservation and for saving and creating such a unique property, specifically for visitors to enjoy. 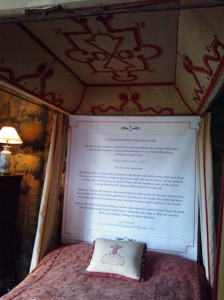 However we did find out some really interesting information while we were there, like the fact that the timbers used in the building were recycled from Henry VIII ships! They can tell this by the crown symbol carved into one of the beams. There is also some graffiti carved into another beam, pictures of sailing ships, that they believe were done by the sailors on their long voyages. I love how something you could easily take for granted in a Tudor building has such a history of its own. 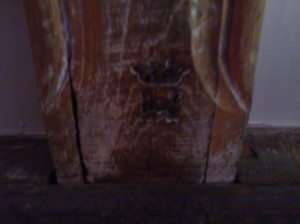 The royal symbol on one of the beams

I really enjoyed that fact that the house didn’t have a visitor route, you were able to wander around how you wanted to and that made it feel like we were exploring. We were given a map with bits of information on which we used at the end of our visit to check we had seen everywhere. I also loved the floors upstairs, they were uneven and made some of the rooms feel like you were sliding down to one corner. I love this about older houses, and at Packwood it really reminded me of Greyfriars, where I had my first job with the National Trust.

Packwood’s gardens were really beautiful and somewhere I would like to go back to on a sunny day to fully explore. After stopping at Packwood’s restaurant for a cup of tea and slice of delicious chocolate cake our little party went on to Baddesley. It really contrasted with Packwood in how strong the many characters in Baddesley’s story are, and how full an image you get of them. The property has several paintings or photographs of the people it talks about which makes me thing there is something to my theory of needing that image to form an idea around. I really enjoyed it again and so did my friends, as you can see in this photo! 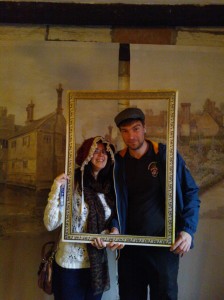 Happy Halloween, hope you have had fun today! The castle has been heaving with small monsters, vampires, witches and ghouls! We have had a really successful day of children’s activities (including scary face painting) taking place in the Old Kitchen’s. It was lovely to see so many children enjoying a day out at the Castle.

The Old Kitchens decorated for Halloween

On Monday the House Team had a pumpkin carving session up at the castle. Even though we are somewhat out of the way up at the castle we do a lot of socializing together, which is really nice. I enjoy the fact that we all get on and can do things together. So we had a get together and got very creative, and here are the fruits (or vegetables) of our labour.

The pumpkins ready to go

Ben and his pumpkin 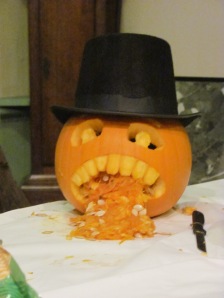 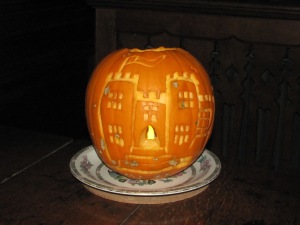 Powis Castle on a pumpkin 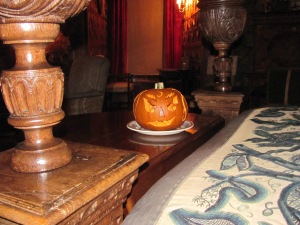 Neil’s pumpkin in the Duke’s room 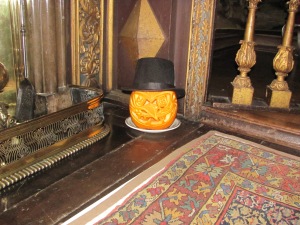 Naomi’s pumpkin in the State Bedroom

Kate’s pumpkin all lit up